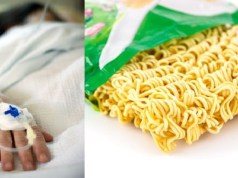 A young university student who ate only instant noodles for three weeks straight in order to save money for Singles Day – China’s version of Black Friday – ended spending all of her savings on medical bills after her unusual diet made her sick.

Instant noodles are standard fare for many university students. They’re cheap, easy to cook and they fill your stomach, but they’re definitely not the most nutritious meal. One young woman recently learned the hard way that surviving on instant noodles alone is not the smartest thing you can do, even if it means saving some money in the short run.

Hong Jia first made news headlines in China at the start of November, when it was revealed that she had been eating only instant noodles since October 15, in order to save a bit of money for Singles Day, the largest online and offline shopping day in the world. In a viral Pear video, Jia said that she had managed to save 749 yuan ($108) by switching to the ultra cheap diet, money that she planned to spend on the November 11 shopping extravaganza.

Sadly, Hong Jia never got to buy all the discounted items she had her eyes on, as she spent Singles Day in the hospital. Chinese media recently reported that the university student who had stunned the internet with her frugality got sick right before the popular holiday, and ended up spending all the money she had saved on IV drips and medicine.

Although she didn’t go into details about her health problems, the young woman said that she experienced high fever which required hospitalization. Although the exact cause of the illness is unclear, Jia added that “eating only instant noodles could be a reason”.

Chinese social media users commented that Hong Jia’s money-saving diet was bound to backfire, and even her own mother showed little sympathy for her.

In a screengrabbed WeChat conversation, the woman wrote “Even I watched that viral video. You deserve it. Just drink more hot water.