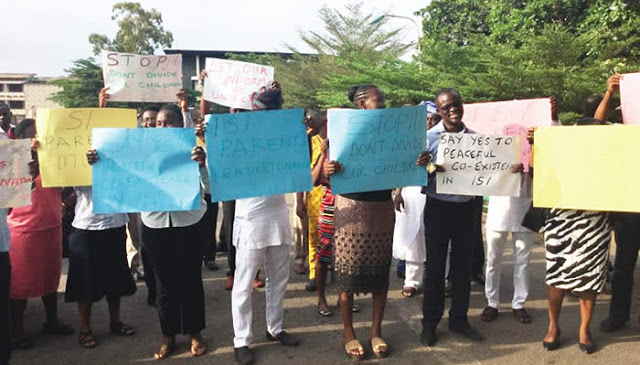 The hijab crisis at the University of Ibadan International School took a new twist on Wednesday as Christian, traditional religion and some Muslim pupils’ parents stormed the office of the
Deputy Vice-Chancellor (Academics) of the institution, Prof. Adeyinka Aderinto, to register their displeasure against the Muslim Parents Forum.

The forum had been championing the wearing of hijab by female Muslim pupils.

Members of the Muslim Parents Forum had twice in the last 10 days distributed hijab to their female pupils against the school’s prescribed dress code.

The Muslim parents had written a letter to the school management and governing board, stating that their female pupils must be allowed to wear hijab on their school uniforms. The letter was entitled: ‘Notification of Muslim Parents’ Resolution on Hijab for our Muslim Girls in ISI’.

Their agitation and the attendant threat to peace led to the indefinite shutdown of the school on Monday. Series of meetings, including that of the Parent-Teacher Association, which the Muslim parents attended but left midway following irreconcilable differences with the school management and other stakeholders, could not douse the tension in the ISI.

On Wednesday, many placard-carrying parents, including an Ifa priest and researcher, who is also the father of two pupils in the school, Awosanmi Abe, condemned the approach of the Muslim parents to the issue of hijab.

The protesting parents said wearing of hijab in the 55-year-old school was capable of dividing the students along religious lines.

Aside Abe, other leaders of the protesters were Olalekan Thani, a lawyer, and Olusola Aleshin.

They argued that the school was an indivisible entity, which no one or group should be allowed to divide for any reason.

The protesters described as dangerous a situation where little children were being made to discriminate against each other along religious, ethnic and other sentiments instead of emerging as global citizens.

In their letter entitled, ‘Clamour for the introduction of religious emblem for our children in the International School, University of Ibadan’, the parents urged the school’s board, which is headed by the DVC, to ensure that the rules and regulations guiding the institution, and to which all parents signed to uphold, reigned supreme.

They insisted that the pupils were friends and colleagues as well as their parents, stressing that any attempt by some Muslim parents to divide them should not be allowed to succeed.

In a letter signed by the trio of Thanni, Abe and Aleshinloye, and addressed to the Vice-Chancellor, UI; the principal and the PTA Chairman, ISI, the parents said they received the news of the second closure of the school in the space of two weeks with serious pain and trauma.

The parents said, “We want to use this medium to inform the management that the school is not only populated by the two dominant religions, but also has traditional believers. These groups have vowed to enforce their rights in line with their Muslim counterparts’ claim to the right to use of their religious emblem in hijab wearing.

“A scenario in which armlets and Ifa traditional beads are freely used as religious symbols in the school will not be funny. What will then become of the uniformity concept of the uniform when the school environment can be taken as a marketplace of sorts, where a rainbow of apparels is the order of the day? May the day never come when the ISI becomes the example of what a school environment should not be.”

They noted that the ISI Muslim Parents Forum’s position was an attempt to disrupt the academic milieu as well as the atmosphere of love and unity already entrenched among the pupils.

They insisted that the rules and regulations of the school must be binding on all consenting parents and their wards, and that the choice of language and procedure adopted by the Muslim parents in their letter dated November 9, 2018 to the school principal and copied to the Chairman of the Board of Governors was both derogatory and an usurpation of the powers of the board.

They accused the Muslim parents of attempting to disrupt the school’s academic activities as well as the love and unity already existing among the pupils, who do not see religious barriers among themselves.