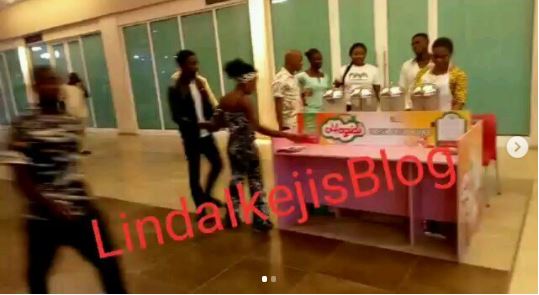 A Nigerian man has publicly humiliated his girlfriend with a fake proposal at the popular Shoprite building in Onitsha.

A very embarrassing video has emerged online showing the moment a man decided to humiliate his girlfriend in public.

The unidentified man reportedly staged a fake proposal to his girlfriend with one aim in mind – to embarrass her.

Local reports claim that the man is aggrieved because she offended him by jilting him for a richer man some time ago. The man she went for reportedly had a car and had things going on well for him.

However, the romance did not last long as things packed up between them shortly after. When this happened, the embattled woman decided to return to her her boyfriend.

Now, to pay her back for jilting him in the first place, he decided to stage this fake proposal at Shoprite in Onitsha. He went down on one knee and just after she accepted, he ‘changed his mind’ and refused to put the ring on her finger, standing up.

The infuriated girl got angry and stormed off.

View this post on Instagram
Nigerian man publicly humilates his girlfriend with a fake proposal at onitsha shoprite. According to reports, the girl left the guy for another guy that was richer and had a car. When that relationship packed up, she returned to this guy. To pay her back, this guy organized this fake engagement to humilate her.
A post shared by LIB – Linda Ikeji Blog (@lindaikejiblog) on Nov 22, 2018 at 12:13pm PST