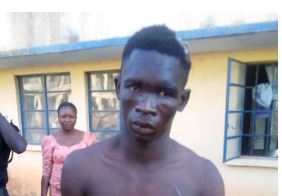 The Police in Adamawa state have arrested a young man, Abubakar Yahaya, who chopped off the wrist of the left hand of another youth, Mohammed Jafar, in a fight over a girlfriend.

Abubakar, aged 23, of Geriyu Junction in the Bypass area of Jimeta, Yola, and Mohammed Jafar from Demsawo, also in Jimeta, got engaged in the fight that involved their respective friends over the subject of the dispute, Mariam Boni, and Abubakar managed to have the upper hand by using a machete to chop off Mohammed’s wrist, according to a police report on the incident.

The report disclosed that the fight started when Mariam, who was Abubakar’s girlfriend, decided to end the relationship, and that Mohammed became a target of attack because she chose him as her new boyfriend.

The police said they swung into action immediately after the incident, which occurred on Wednesday, November 21, and were able to arrest Abubakar, Mohammed (now on hospital admission), Mariam, and the friends of both Abubakar and Mohammed who were involved in the bloody fight.

The lot and some other suspects to do with other crimes were paraded at the Police Command headquarters in Yola Thursday evening by the state Police Public Relations Officer, Othman Abubakar, who told newsmen that the arrest of the suspects was a result of deliberate efforts to check crimes across the state.

He said Abubakar’s gang had first started a fight on November 20 when they attacked Mohammed’s gang at a gathering and that the police had stepped in to stop the fight, only for it to be repeated the next day and taken to the extent that Mohammed would at best now come out of hospital as a young man without a left wrist.

This act is reprehensible and the police will be diligent in prosecuting the offenders according to the law,” the PPRO said.