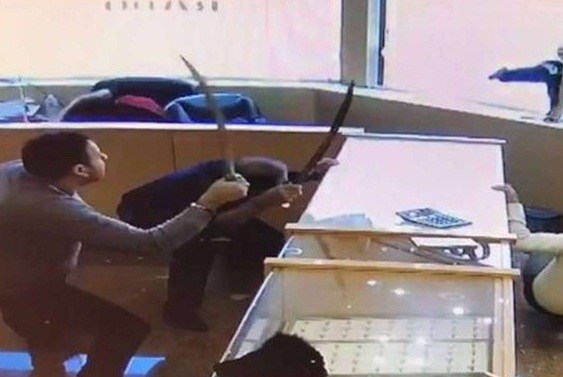 Four robbers were stunned after three Jewellery shop employees fought them off with swords, well we are so sure that wasn’t the sort of resistance they expected.

The shocking incident took place shortly after noon at Ashok Jewellers in Mississauga, Ontario, Canada according to Peel Regional Police.

It is normal for thieves to meet heavy security and other obstacles, but sword wielding employees is extremely weird.

CCTV footage from inside the store shows what appears to be four robbers smashing the shop window with what looks like a hammer.

But just as one of the robbers jumps through the window he is met by an employee, who charges towards him wielding a sword above his head.

A second employee then arrives with a sword to provide back-up, but he stacks it on his arse, knocking over a chair. In the moment, it probably wasn’t an appropriate time for laughter, but you can only hope the staff have shared a good chuckle upon watching the footage.

One of the robbers then points what appears to be a handgun in the direction of the employees, who duck behind the counter. But as the robber has a second stab at entering the window, the employees wield their swords once again, with a third employee also coming to the fore with a sword.

The men fled in a dark SUV and police haven’t identified any suspects as of yet.