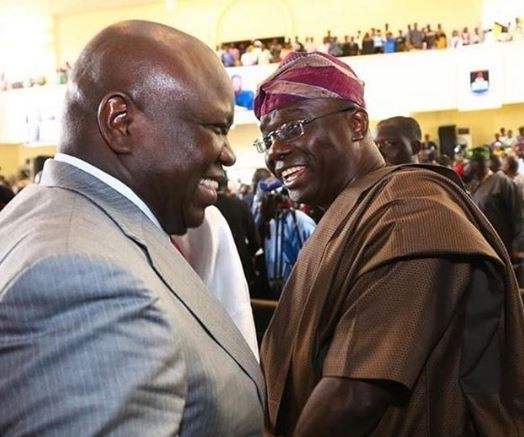 Lagos State Governor, Akinwunmi Ambode has assured that the Governorship candidate of All Progressives Congress (APC) in the State for the 2019 general elections,
Mr Babajide Sanwo-Olu will not abandon ongoing projects but rather complete and build on the enduring legacies already put in place by his administration.

Governor Ambode, who said this while inaugurating an ultra modern lecture theatre donated to the Lagos State University (LASU) by businessman and philanthropist, Mr Remi Makanjuola, said while efforts were on to complete all the major projects initiated by his administration, Sanwo-Olu would nonetheless complete those ones he is unable to deliver before the expiration of his tenure next year.

“I am so excited about the fact that Mr Sanwo-Olu has actually come out here and he has issued a promissory note and what that mean is that we are going to have a government of continuity.

For whatever structures that we have in LASU right now, and I’m going to also convince our chief negotiator, Dr Wale Babalakin, we are already doing Senate building here, we are doing Students Arcade and we are also doing the Library, I hope I will be able to complete and finish them but if I am unable to complete them, I speak on behalf of Mr Sanwo-Olu that he will finish and also do the Staff School.

We are not campaigning yet but truly that is the spirit of the kind of governance that we bring to Lagos; that is the spirit that we really want to see and then we should be able to show leadership in all spheres of life that we find ourselves,” Governor Ambode said.

Speaking on his administration’s intervention in the educational sector, he said in the last three and half years, at least N15billion has been invested in revamping infrastructure in schools across the State to ensure students can learn in a conducive environment, while 3,400 primary and secondary teachers were employed to improve the teacher to student ratio as well as quality of learning in schools.