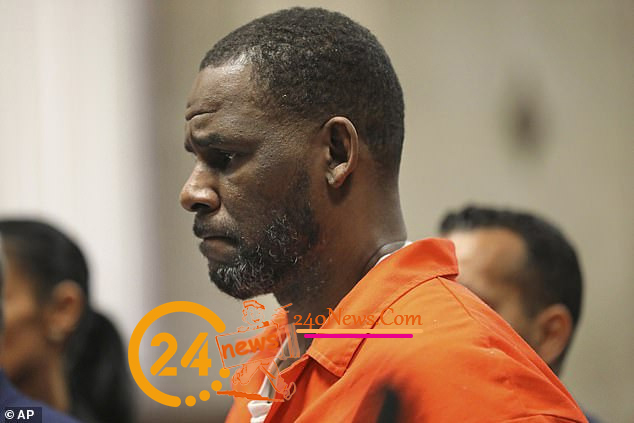 Singer, R. Kelly has been denied a release from jail after requesting to be freed due to the Coronavirus pandemic.
Kelly’s attorneys had asked a judge in Chicago to place the singer on home confinement at the Roosevelt Collections Loft apartment complex in Chicago. The attorneys had also complained that the prison’s new restrictions to mitigate the spread of COVID-19 have made it impossible for them to meet with Kelly and prepare for trial.
According to legal documents obtained by TMZ on Tuesday, a judge in Chicago denied the motion, saying that the 53-year-old R&B singer remains a flight risk.
The judge said: ‘[Kelly] is currently in custody because of the risks that he will flee or attempt to obstruct, threaten or intimidate prospective witnesses. The defendant has not explained how those risks have changed.’
As for Kelly’s fears he’ll contract Coronavirus if he remains behind bars, the Chicago judge explained there are no confirmed cases of the virus at Metropolitan Correctional Center (MCC) in Chicago where the singer currently is.
The judge also points to measures taken by the Bureau of Prisons in combating the spread of the virus in its facilities , like suspending all social visits and suspending inmate facility transfers.
The singer had also argued that he is part of the at-risk group, but the judge said that Kelly is fifty-three years old, twelve years younger than the cohort of ‘older adults’ defined by the CDC as at high risk.’
While Kelly noted that he’s had surgery while in jail, the judge added, “he does not explain how his surgical history places him at a higher risk of severe illness. Moreover, officials in Chicago have advised the government that doctors have completed all treatment for the defendant’s recent operation.”
The Judge also said that it is unlikely that his trial will proceed as scheduled explaining ‘as conditions return to normal, [Kelly] and his lawyers will have additional time to prepare for trial.’
R.Kelly is being held at the Chicago Metropolitan Correctional Center, where he is awaiting trial on racketeering, sexual misconduct and other charges in three jurisdictions.
Post Views: 75
Share