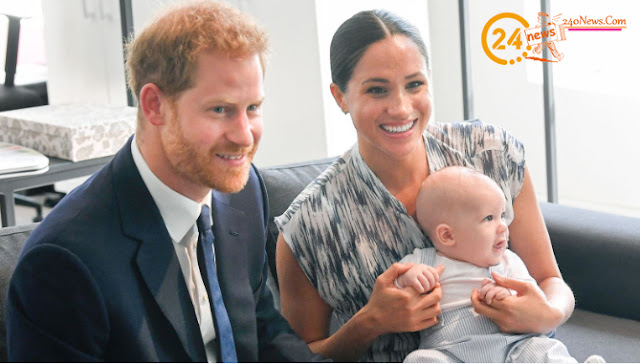 The Duke and Duchess of Sussex have announced plans to launch a new charitable organisation named Archewell that aims to “to do something that matters”.
Prince Harry and Meghan Markle said they “look forward” to launching the foundation, which will replace their Sussex Royal brand now they have stepped down as senior royals. They are reported to have plans to include their own charity as well as a website, Sky News reports.
The couple also revealed their son Archie’s name was inspired by the Greek word “Arche”, which means source of action.
Their new organisation, which was first reported in the Daily Telegraph, has been delayed due to the coronavirus pandemic.
An announcement divulging further details about the organisation will be made “when the time is right”, the couple said.
They are considering how to create their own charity and volunteering services after paperwork regarding their new brand was reportedly filed in the US last month.
The couple also plan to include a wide-ranging website and sharing “education and training materials” via films, podcasts and books, according to the newspaper.
In response to the report, Harry and Meghan said they were focusing their efforts on the coronavirus pandemic but felt “compelled” to reveal details of the venture.
The couple said: “Like you, our focus is on supporting efforts to tackle the global COVID-19 pandemic but faced with this information coming to light, we felt compelled to share the story of how this came to be.
ALSO READ : UK’s Queen Elizabeth Thanks Health Workers Around the World (VIDEO)
“Before Sussex Royal came the idea of Arche – the Greek word meaning source of action.
“We connected to this concept for the charitable organisation we hoped to build one day, and it became the inspiration for our son’s name. To do something of meaning, to do something that matters.”
They continued: “Archewell is a name that combines an ancient word for strength and action, and another that evokes the deep resources we each must draw upon.
“We look forward to launching Archewell when the time is right.”
Reacting to the report about Harry and Meghan’s new charity organization, English TV host, Piers Morgan, who never misses an opportunity to criticize Meghan Markle, tweeted: “Total number of f*cks the British public give about these two announcing their ‘plans’ from Hollywood right now: 0.” 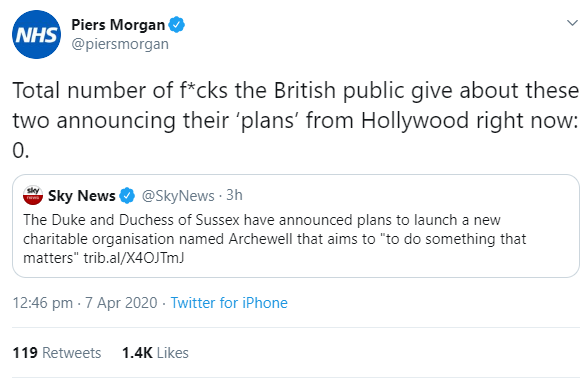