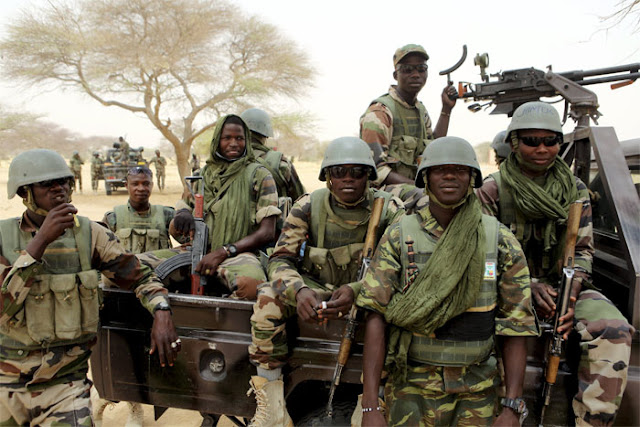 An encounter on Monday between the troops of Operation Lafiya Dole of the Nigerian Army in the North-East and some Boko Haram terrorists has resulted in the death of many insurgents.

A statement on Wednesday by the Director, Defence Media Operations, Brig. Gen. Bernard Onyeuko disclosed the terrorists attempted to infiltrate the Nigerian Army location at 3 Battalion in the Gamboru area of Borno State but met stiff resistance from the troops.

He added that no soldier lost his life in the encounter which resulted in the death of many insurgents of the Boko Haram and Islamic State West African Province and the recovery of seven gun trucks.

Onyeuko said in a statement that the troops seized three gun trucks, two anti-aircraft guns, two AK-47 rifles and one rocket-propelled grenade tube from the insurgents.

“Troops of 3 Battalion and Quick Response Force Army Super Camp 11 in Gamboru on a targeted patrol had yet another fierce encounter with some Boko Haram and ISWAP marauders in a convoy of seven gun trucks and many motorcycles approaching the battalion’s location at about 6pm on Tuesday.

“Consequently, the criminals were overpowered and pursued up to the Wurge area. No soldier lost his life, and no military equipment was seized during the encounter.”

Meanwhile, the Coordinator of the Defence Media Operations, Maj. Gen. John Enenche, has disclosed that contrary to reports in some quarters, there was no rift between the Nigerian and Chadian armed forces.

He made the disclosure while fielding questions from newsmen in Abuja where he denied any form of rivalry between Nigeria and Chad or any other country in the Lake Chad basin in the counter-insurgency battle.

“This is the fallout of the recent offensive actions of the armed forces of Nigeria in the North-East Operation Lafiya Dole.

“There is no disagreement between the Nigerian and Chadian troops and joint operations are ongoing.

“The combined effort of troops of the land component, maritime component and air component has resulted in the neutralisation of scores of the Boko Haram terrorists and ISWAP elements.”