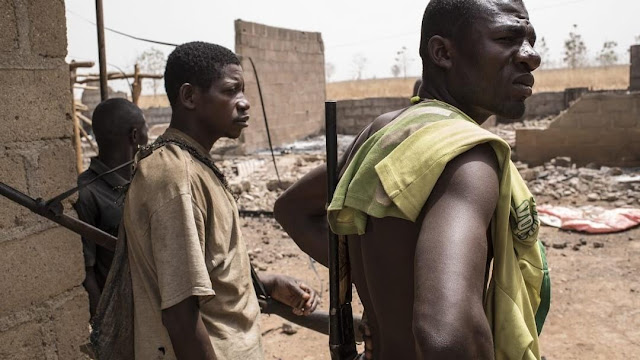 A report by Punch Metro has shown that a Tiv man, identified simply as Sunday, and three others have allegedly burnt to death in a bush the Onibedo of Ilotin Ekiti, Chief Sola Fatunla.

It was gathered that Sunday, who deals in charcoal, had earlier accused Fatunla of having a love affair with his wife, identified simply as Tadeni, but the matter was said to have been resolved as it was realised that the chief and his wife were mere family friends and Sunday was said to have apologised for his behaviour.

But events took a tragic turn on Sunday when Fatunla followed the man to the bush.

Sunday had allegedly begged Fatunla to use his influence as a chief in Ikole Ekiti to plead with some people he claimed had seized his charcoal in the bush.

A source said, “While accompanying him and Tadeni to where the charcoal was allegedly seized, three others, who Sunday had allegedly connived with to abduct Fatunla and Tadeni, appeared from the bush around Iyemero Ekiti in the Ikole Local Government Area of the state and manhandled the chief and the lady.

READ ALSO: Alarming: Thugs has pick-point the Pedestrians In Oshodi for robbing

“Both Fatunla and Tadeni were tied to trees. The men beat Fatunla with their cutlasses. Later, they poured petrol on him and set him ablaze. It was when they came back to mete punishment out to Tadeni that they realised that she had escaped.

“When Sunday and his accomplices could not find Tadeni, they decided to escape through Patigi in Kwara State to Benue State with the aid of Fatunla’s motorcycle. Unfortunately for them, they were apprehended by vigilantes in Patigi, who queried their mission at that time of the night.

“When the vigilantes stopped Sunday and his accomplices to question them as to their mission in the area, especially during the lockdown, Fatunla’s phone that was in Sunday’s pocket exposed them, following which they were arrested and handed over to the police in Kwara State.”

According to the source, Fatunla’s remains have been deposited in the morgue, while the suspects have been taken to the Ikole Ekiti Police Division for transfer to the police headquarters in Ado Ekiti.

The Police Public Relations Officer in Ekiti State, Sunday Abutu, confirmed the incident saying, “There was a murder case; one of the chiefs in Ikole Ekiti was murdered on a farm. We are still trying to investigate the matter. I will get back to you on the details.”