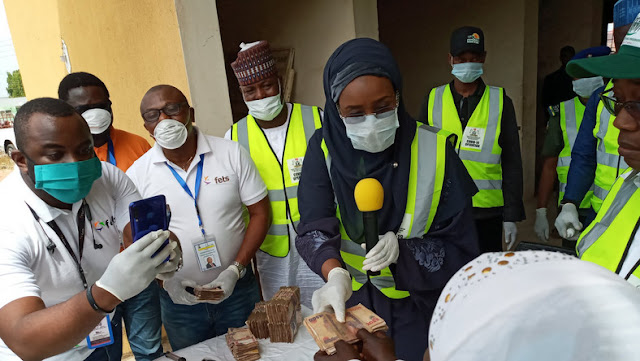 What does it mean to be poor? The story of 70-old widow Mariam Isibu, who lives in Aujara, in the Jahun Local Government area of Jigawa State will melt your heart.

Madam Isibu could not hold back her emotions – she busted into tears, as her name was called out as a recipient of the N20,000 cash from the Federal Government officials who were in the state to give stipends to the poor and vulnerable under conditional cash transfer of the social security programme.

Mari Isibu who had to be taken to a nearby shelter and consoled by the officials who helped her to hold her money as her emotional outburst prevented her from even holding the money, given to her by the government.

Speaking to our reporter moments after, she said “I never in my life own such an amount, in fact, I’ve never seen talk less of owning such an amount until today.”

The old woman is among several others who converged in Aujara village to collect the N20,000 each as directed by President Muhammadu Buhari as part of palliative measures by the Federal Government to cushion the suffering owing to the stay at home order to curb the spread of covid-19.

The grandmother commended President Buhari, initiating conditional cash transfer programme.
She said she had raised all her children alone since the death of her husband decades ago. Sadly, she lost her child seven years ago, and has been left to be taken care of by her grandchildren who are also indigent.

She said; “tried as I could, I never at any time held N20,000 before. I don’t have child, it is my grandchildren that are taking care of me, they too are poor, so I don’t have anybody that can give me such money at once,this gesture is unprecedented in my life.”

Also speaking, Hajia Kubura Umar, a 45 year-old housewife in Ciromawa village of Kafin Hausa Local Government said, the money will change her economic status and that of her family.

She said, she will use N10,000 as capital for her bean cake (Kosai) business,and will buy food stuffs with the remaining N10,000 to complement the feeding of their children in this period of stay-at-home.