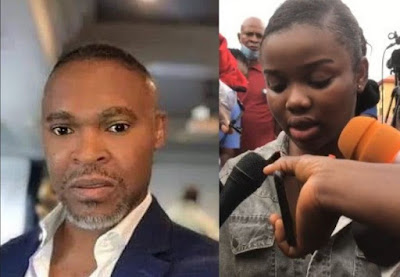 The trial of Chidinma Ojukwu, the suspect fingered in the murder of Super TV Chief Executive Officer, Usifo Ataga, before a Lagos High Court, sitting at Tafa Balewa Square, TBS, was adjourned due to the composure of the witness.

Chidinma Ojukwua a 300-level Mass Communication student of the University of Lagos,(first defendant), and two others are on trial over Ataga’s murder.

Ojukwu is standing trial alongside her sister, Chioma Egbuchu, and one Adedapo Quadri.

At the resumed hearing of the matter today, the prosecuting counsel, Yusuf Sule, asked the court to adjourn the trial till tomorrow, November 30.

He told Justice Yetunde Adesanya that the grounds for which he was asking for the adjournment was that the witness they are calling just arrived the court from Asaba this morning (Monday).

Sule said: “We would be asking for an adjournment for tomorrow on the grounds that the witness we are calling just came in from Asaba this morning and he is not really composed.”

The first defendant’s counsel, Onwuka Egwu, did not object to the application of the prosecution.

The second defendant’s counsel Babatunde Busari, said though he is not opposing the application, but that the prosecution have other witnesses they could have called.

On his part, the third dedendant’s counsel O. A. Ogunsanya, told the court that they would oblige the prosecution’s adjournment in the interest of justice.

Consequently Justice Adesanya, at the instance of the prosecution, granted the oral application for adjournment and adjourned the case till November 30 for continuation of trial.

At the last adjourned date, a businessman, Ifeoluwa Oluwo, had narrated to the Court how he bought late Ataga’s laptop for N495,000 from Chidinma Ojukwu.

The three defendants were arraigned on October 12 on a nine-count charge preferred against them by Lagos State Government.

Ojukwu and Quadri are facing the first to eight counts bordering on conspiracy, murder, stabbing, forgery, making of bank statements and stealing.

The third defendant, Egbuchu, is facing the ninth count of stealing a phone belonging to the late Ataga.

The first and second defendants were alleged to have conspired and murdered Ataga on June 15, by stabbing him several times with a knife on the neck and chest.

Chidinma and Quadri were also accused of committing forgery by procuring and making bank account statements purported to have been made by the deceased.