The Bayern Munich striker was the standout performer of 2020 and was denied the Ballon d’Or that year as it was cancelled due to Covid. 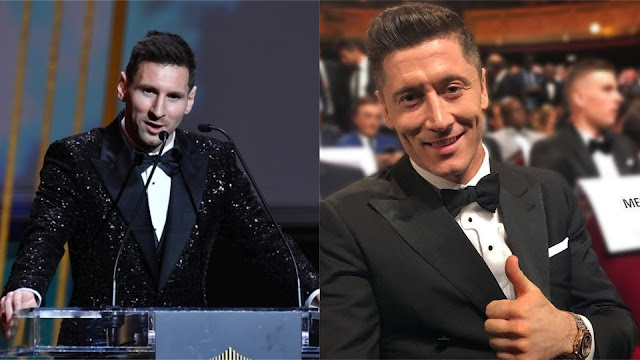 Robert Lewandowski has knocked Lionel Messi over his tribute towards him at the 2021 Ballon d’Or ceremony, labeling his rival’s comments ’empty words’.

Messi, 34, controversially beat Lewandowski, 33, to the 2021 prize, with many fans and pundits stating that the Polish striker was more deserving of the award.

The Bayern Munich striker was the standout performer of 2020 and was denied the Ballon d’Or that year as it was cancelled due to Covid.

In his acceptance speech, Messi acknowledged that Lewandowski deserved the prize for 2020, and called on event organisers France Football to retrospectively hand the Pole his gong.

‘Last year everyone agreed that you were the winner and I think that France Football should give you the Ballon d’Or that you deserve,’ he said.

However, the 33-year-old was unconvinced by Messi’s comments, labelling them ’empty words’ before insisting that he does not care for a token reward.

‘I’m not that enthusiastic about getting the 2020 award,’ Lewandowski told Kanale Sportowym via Marca.

‘I would like it [Messi’s 2020 Ballon d’Or statement] to be a sincere and courteous statement from a great player and not just an empty words.’

Lewandowski has scored 130 goals in 108 games since the start of the 2019-20 campaign, and him missing out of the top prize will serve as motivation for his Bayern Munich team-mates, Thomas Muller revealed.

‘From the Bavarian, Polish, and also German point of view, last night’s Ballon d’Or award ceremony was definitely a disappointment, for some even a bit more,’ Muller said in the wake of the result.

‘Although I’ve been in the business a bit longer and therefore wasn’t really surprised about the outcome (it was similar with Franck Ribéry in 2013), the whole thing has formed or once again solidified a thought in me: We have great players in the Bundesliga and don’t have to hide.

‘For worldwide recognition, however, we need more international successes. That’s a huge motivation for me, too, to put everything on the line to bring the Champions League back to Munich and show the soccer world what’s what.

‘And above all, what German soccer has to offer. The next opportunity to do so will be next Wednesday at the Champions League match against FC Barcelona. Let’s go for it!’