According to Bobrisky, his 30th luxury birthday party was a small movie compared to what he would be doing for his housewarming. Bobrisky said he would literally bomb everywhere, and if he is living a fake life as widely speculated, he still wants the kind of life.

He wrote: No party has beat this party yet in Nigeria, still waiting for that party that will beat mine this year thou. This one was a small movie wait for house warming I go bomb everywhere. If this is fake I want it or don’t you want it.In a now-deleted social media post, Nigerian crossdresser Idris Okunneye popularly called Bobrisky promised to bomb everywhere for his housewarming party.

Sharing beautiful moments from his 30th birthday party, Bobrisky bragged that no party has met his party’s standard and he’s still waiting for the party that would beat his party this year.

Reacting, a fan questioned Bobrisky on who is competing with him, while another criticized him for turning his birthday party into reception.

Anuoluwapelumi wrote: Who is competing with you.

iam_arikeade wrote: He reach your turn bob you turn birthday to reception 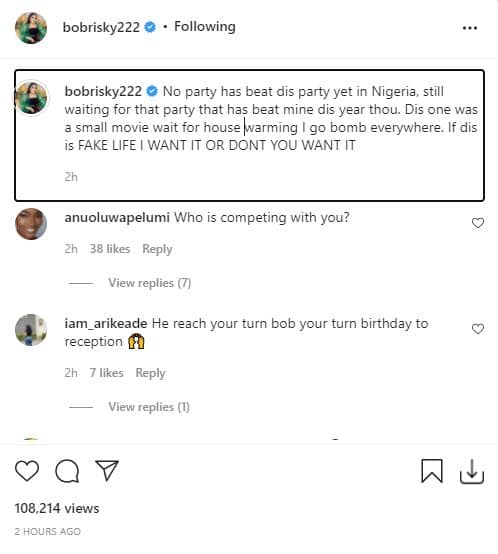