Dikko told the court that the Nigerian Air Force “has its own way of operation,” adding that the Service had no e-payment system during his time. 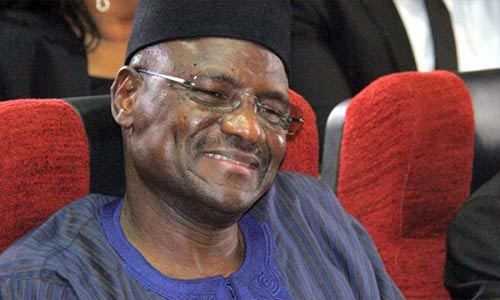 A former Chief of Air Staff, Mohammed Dikko Umar has opened up on how he got billions he used to acquire properties.

The retired air chief marshall spoke at the Federal High Court in Abuja, on Wednesday while denying purchasing properties he acquired while in service with funds belonging to the Nigerian Air Force (NAF).

Dikko who is facing a one-count charge of allegedly diverting N9.7 billion from NAF’s accounts and using the fund to buy personal properties in choice areas of Abuja and other places disclosed how he got money to purchase his properties during his cross-examination in court on Wednesday, December 8.

While fielding questions under cross-examination by EFCC’s lawyer, Sylvanus Tahir, Dikko said that he acquired the properties with estacodes he earned from trainings and flying African Presidents while in service.

“For thirty six years of my service my lord, I served in the Presidential Fleet for seventeen years. Most of the flights I took were external trips outside Nigeria, and I went for many training trips outside the country,” he told the trial judge, Nnamdi Dimg alt=’I have earned a lot of estacodes and I have two farms- Ex-NAF chief, Dikko Umar explains how he acquired N4.7bn properties’ class=’img-responsive text-center’ style=’margin: auto;’ba, while fielding cross-examination questions from the prosecutor on Wednesday.

A statement by the spokesperson for the EFCC, Wilson Uwujaren, said Mr Dikko further disclosed that “he flew virtually all African Presidents during his years in service.”

Dikko, who was being cross-examined by EFCC prosecutor, Sylvanus Tahir, said the only African leaders he did not fly while in service were the Presidents of Cote D’Ivoire and Togo.

“I have earned a lot of estacodes, lots of foreign trips and two farms in Abuja with about 17 hectares of land and the other two in Kaduna are four hectares and 200 hectares respectively. I have been a farmer throughout my life” he added

Asked why he did not provide the court with documents to back up his claims about the estacodes, he said nobody asked him to do so. He, however, added that he mentioned it in his statement to the EFCC.

Dikko told the court that the Nigerian Air Force “has its own way of operation,” adding that the Service had no e-payment system during his time.

The EFCC however told the court that documented evidence before the court showed that while Mr Dikko was in office, he received his salary through the bank.

“Also, pages 22 to 472 in the exhibit, shows e-transactions for upkeep to some under-listed officers. And those transactions happened in August 2012, when the defendant was the Chief of Air Staff.”

The judge adjourned the matter till March 1, 2022 for the adoption of final addresses.