A suspected ritualist has been apprehended in Ikorodu for being in possession of fresh human parts. 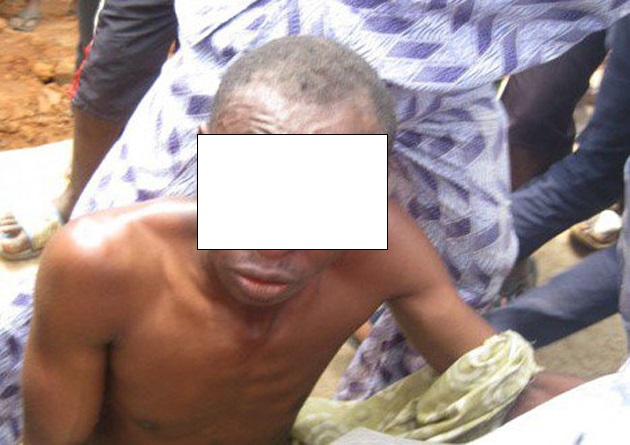 He is now being held at Sagamu Road Police Division.

The 41-year-old man has been identified as Sikiru Kolawole.

The Spokesman of the Lagos Police Command, Mr Adekunle Ajisebutu, who confirmed the incident, said that the suspect was reportedly found with fresh human hands, intestines and skull from Ojokoro cemetery in Ikorodu.

The Commissioner of Police, CP Hakeem Odumosu, has ordered the case to be transferred to the State Criminal Investigative Department (SCID) at Panti, Yaba, for diligent investigation and prosecution.

Earlier, the Ikorodu Local Government Chairman, Hon. Wasiu Adesina, who led members of his cabinet to the scene of the crime, said the council promised to do everything necessary to curtail the dastard act and its reoccurrence.

The council boss immediately directed the environment department to clear every part of the cemetery to avoid any black spot inside and outside, adding that the apprehended suspect would be dealt with according to the law to serve as a deterrent to others.

“While we take care of the living, the council has mandated itself to cater for our dead ones and that is why we have rehabilitated the Ikorodu cemetery to international standard.

“I will ensure proper security measures are put in place and deal ruthlessly with anybody engaging in such illegitimate act at the cemetery.

“We have done lots of rehabilitation, illuminating the cemetery with solar power, provided water system and perimeter fencing,” he said.

Mr Nurudeen Lawal, one of the local guards at the cemetery, said that they engaged with the suspect in combat before he was apprehended around 1:30 am with a sack full of human parts while trying to escape.

“We carry out surveillance round the cemetery at least three to four times in a shift to observe the surroundings.

“Suddenly, we started hearing some funny sound, on getting there we saw the suspect with a sack loaded so we challenged him on how he got in and his mission at the cemetery.

“During the interrogation, we challenged him to open his sack, he resisted and it resulted in a combat and trying to use the weapon with him to scare us away to enable him flee.

“Subsequently, we grabbed and took him to the police station with the human parts for further interrogation,” Lawal said.