According to a report by SaharaReporters, the Ojodu Local Council Development Association in Lagos State has revealed the identities of some secondary school students who were injured by a truck in the Ojodu area of the state. 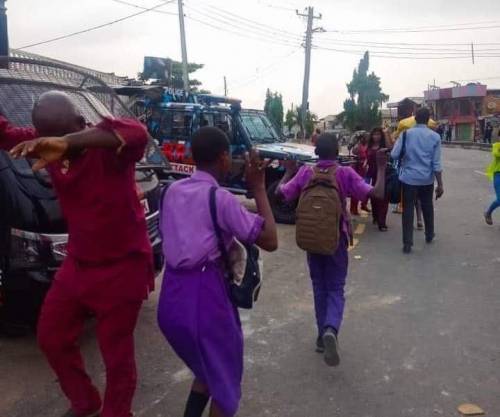 The students were going home after closing from school around 2 pm on Tuesday when the truck ran over them.

Two students identified as Adedoyin Adebayo and Akpolebi Israel were killed in the accident.

In a statement on Thursday, Chairman of Ojodu Local Council Development Area, Odunmbaku ‘Segun, said all the injured students are in stable condition.

The statement read, “Today, I visited hospitals where those injured students were admitted. Three of them were discharged and we moved some to Lagos State University Teaching Hospital (LASUTH) and LASUTH annex at Gbagada for further checks and treatment

“At LASUTH, we have four inpatients and one outpatient. Our thoughts and prayers are with all of them. We also met with the parents of the deceased, we’ll continue to offer them our prayers, and we are in constant contact with the families.

“Those three in LASUTH annex at Gbagada are going through normal checks, X-ray scans and others, we still have five at Lagos State Accident and Emergency Hospital. We are hopeful that all the remaining students under observation would be discharged soon. While thanking God for the recuperation of the future leaders, we implore all drivers to be mindful of other road users and pedestrians by driving carefully.”

Below is the full list of students involved in the truck accident at Ojodu: 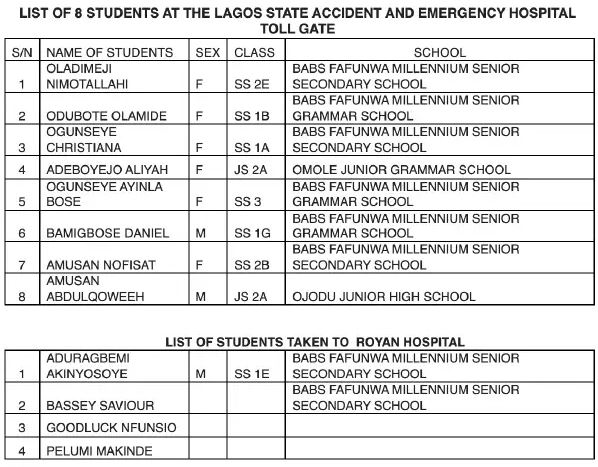 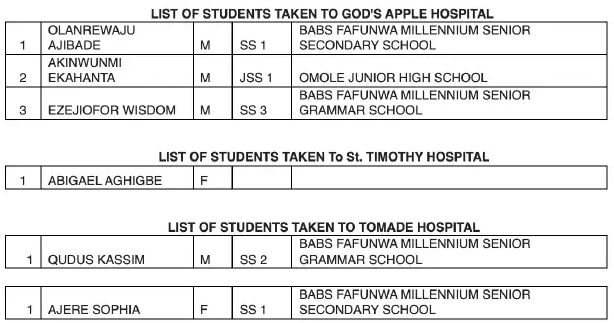