There is no doubt at all that the year 2021 has indeed been an eventful year and there have been several issues that caught the attention of many and went viral on social media. 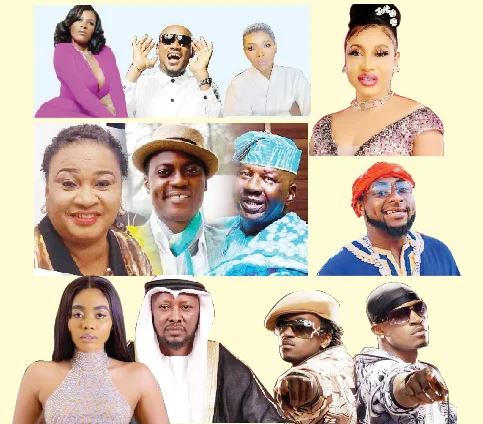 In November, the sudden reunion of twin brothers— Peter and Paul Okoye— of the defunct P-Square who had separated since 2017 over ‘irreconcilable differences’, took the nation by storm. Their reconciliation came a few days after Peter visited Paul’s family in the United States of America and went shopping with his twin brother’s kids. The gesture sparked conversations on social media, with many fans hinting that the erstwhile estranged brothers had decided to mend fences and would start working together again.

Shortly after, both brothers resumed ‘following’ each other on Instagram. At a party to celebrate their fortieth birthday, the brothers could be seen holding hands and singing from their repertoire of hit songs as P-Square.

They were initially billed to headline a concert as P-Square on Saturday, December 18, 2021, in Lagos. However, some days ago, Peter took to Instagram to inform his fans that he was ill and would be able to perform on that day. He also thanked Paul for his support. The concert will now hold on Christmas Day.

Popular singer, David Adeleke, aka Davido, amused many when he went on to social media to ask his friends and colleagues in the industry to give him N1m to ‘clear’ his Rolls Royce from the seaport ahead of his 29th birthday. He then posted his Wema Bank account number, where he wanted the donations channeled. Just hours after he made the appeal, the singer was bombarded with money transfers from people from different walks of life, including kings, artistes, politicians and fans. Within the space of three days, the singer had raised N201m. He then shocked many when he announced that he would add N50m to the money and donate N251m to orphanages across Nigeria. He went on to form a committee that would iron out the modalities for the transfer of the funds to the intended recipients. According to him, only government registered orphanages would benefit from the ‘largesse’.

The singer was roundly commended for his kind gesture and he was even interviewed on American news channel, Cable News Network.

Executives of Wema Bank, obviously impressed with how fast the young entertainer was able to raise such a huge amount within a short period, quickly flew to Dubai (United Arab Emirates) to have a meeting and photo session with the artiste.

The singer was later signed as an ambassador for the company.

In this part of the world, funerals are usually elaborate affairs. But, in June 2021, socialite and club owner, Obinna Iyiegbu, popularly known as Obi Cubana, practically changed the way people viewed funerals.

Cubana hosted a lavish burial ceremony in Anambra State and it was the talk of the town for a long time. With many celebrities and socialites in attendance, the burial will go down in history as one of the most talked about in the country.

Though he was criticised by some for spending such a huge amount of money on a funeral, the socialite stated that he did it to honour his mother. According to him, he and his siblings had planned to organise a carnival-like eightieth birthday ceremony, but she died before the plans could come to fruition. Cubana added that they then decided to invest all the resources earmarked for the birthday on her burial.

During the burial, several people sprayed huge bundles on cash and it seemed like a competition to see who could spend the most money. Over 200 cows were also said to have been bought for the event.

However, Cubana later stated that most of the funds and other materials used for the burial were got from friends as a form of goodwill in reciprocation of how he had also been of help to them in the past.

Singer, Tiwa Savage, became a major topic of discussion in October when during an interview with American radio presenter, Angie Martinez, of Power 105.1, she revealed that she was being blackmailed over her sex tape. According to the ‘Somebody Son’ singer, she refused to be embarrassed over doing ‘something so natural’. Shortly after Savage made the announcement, several personalities, including other celebrities and fans, supported her and offered her words of encouragement.

The video was eventually released and was viewed by millions of people. About a week ago, the singer was included in Google’s list of most searched persons in Nigeria in 2021.

Their demise got millions of their fans mourning, with public figures, politicians, and other entertainers paying glowing tributes to them.

Popular singer, Innocent Idibia, aka 2Baba, also had his fair share of controversies when his wife, Annie, took to social media to call out Perosaiyemi Adeniyi, who has three kids with the singer.

Annie had alleged that 2Baba told her he was going for a shoot but instead went to stay with Pero under the same roof in the United States of America. Annie’s claim subsequently sparked a reply from the singer’s brother and further degenerated into a war of words between Annie’s family and her in-laws. Following the development, 2Baba took to social media to admonish his family members and fans to ‘stop the madness as he would not sit back and watch everybody battle in the name of love’.

After everyone thought the matter had died a natural death, Pero’s lawyers wrote a letter to Annie, demanding the sum of N500m as compensation for alleged personal injury, reputational damage, embarrassment, shame and emotional distress suffered as a result of what she termed ‘a malicious, libellous and defamatory publications’ against her.

Grammy Award-winning singer, Ayo Balogun, aka Wizkid, is undoubtedly one of the biggest artistes out of Africa at the moment.

Perhaps one of the biggest events that emphasised his dominance in the music industry was his Made in Lagos tour in London, United Kingdom.

Tickets for the show at the 20,000-capcity 02 Arena in London were sold out within two minutes. The singer was also nominated twice for the 2022 Grammy Awards in the categories— ‘Best Global Music Performance’ and ‘Best Global Music Album’— for his hit song, ‘Essence’ which featured Tems. A remix of the song was also done with Canadian singer, Justin Bieber.

Tonto Dikeh vs Kpokpogri and Janemena

Actress, Tonto Dikeh, has been involved in quite a number of controversies over the years. Some months ago, she fell out with her ex-boyfriend, Prince Kpokpogri, and they had a messy breakup. The matter had another twist when Tonto stated that dancer and Instagram sensation, Janemena, was cheating on her husband. She claimed that Jane and Kpokpogri usually had marathon sex sessions. An audio recording also surfaced on the Internet, with a voice believed to be that of Kpokpogri bragging about his sexual encounters with Janemena. In the audio, the male voice alleged that he continued having sex with Janemena after she got married, and that Janemena confessed that even her husband did not have that much sex with her. Though Kpokpogri later distanced himself from the audio recording and tendered an apology to Janemena and her family, Tonto stuck to her guns and threatened to release more evidence to back her claims.