A young lady who has fallen head over heels in love with an old man has fired salvos at the naysayers, saying their negative comments won’t change her mind. 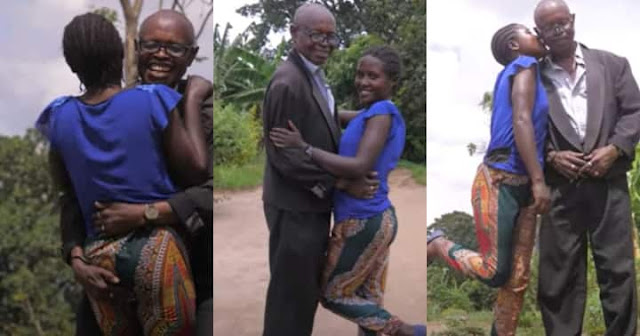 Whereas the woman is 22, her heartthrob, David, is 76-years old and evidently, he’s old enough to be her grandfather.

YouTube channel AfriMax put the spotlight on the couple and their ‘weird’ union in its latest content shared online.

The duo said they met in church a few years ago and fell in love. They have been together for four years now.

It was revealed that David was an intercessor in church and always prayed to God to bless him with a lover and one day Claudine showed up and a voice from nowhere told him that ‘this is your suitable partner’.

He had never been married before and he spends most of his time in church spreading the gospel.

“I prayed and fasted,” he said. Sharing her story, the young lady said after meeting, she never thought they would fall in love because she always saw him as a father. Claudine said they were criticized over their age difference but that never changed her feelings towards him.

“People will talk but there is nothing that will change since I love him. They would say we don’t match but I told them a loving heart is enough,” she said.

She also recounted the role some friends have played to get her separated from her sweetheart and the fact that she’s not after the man’s possessions. “I never fell in love looking to inherit possessions,” she said.

Claudine pampered her better half with love and she said: “He makes me happy and always lifts me. No other man has ever done this to me.”

The lady said her parents never had a problem with her choice to settle with David.