Dominion Okoro, the 25-year-old housemaid of the deceased mother of ex-governor Lucky Igbindeion’s mother, Madam Maria Igbinedion, has recounted how she killed the 85-year-old woman before carting away with her jewelry on December 2 at her residence in GRA Benin city. 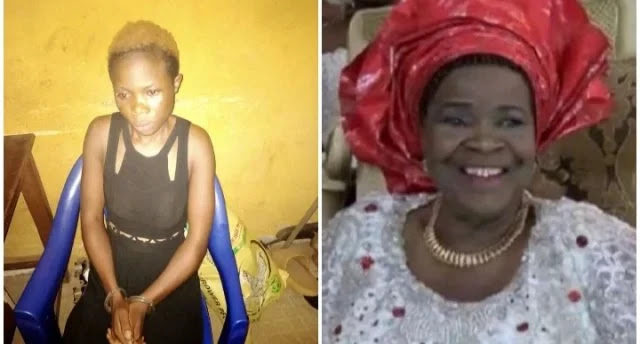 Okoro who was recently arrested in Calabar, Cross Rivers state (read here), said she hit her late boss with a stool while sleeping in order to rob her of her possessions.

“I killed Mama (Madam Maria Igbinedion) to carry her money. She did not offend me. While she was sleeping on her bed, around 12:01 a.m. on December 2, 2021, I used a stool to hit her on the head and she was shouting for help, but only the gateman was around and he did not hear the shout. Mama later died.

I waited till 4 a.m. on December 2, 2021, before leaving the house with Mama’s N100,000, wristwatch, and jewellery. I escaped to Cross River State, but I was later arrested by the police.”

The Commissioner of Police in Edo state, Phillip Ogbadu, revealed that it took time, efforts and money to arrest Dominion, noting that no fewer than 20 persons were first arrested before Dominion was arrested and she confessed to committing the crime.

Madam Igbinedion has since been buried.