Nnamdi Kanu, the leader of the Indigenous People of Biafra, on Friday, released what could be his New Year message for 2022 which, he said, would herald divine grace and favour of unimaginable proportions. 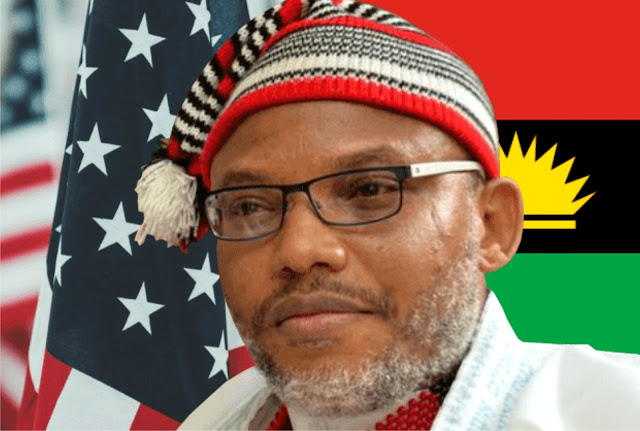 According to him, abiding grace and miraculous happenings would punctuate 2022 while sorrow and sighing shall take a sudden and unremitting flight.

While cursing perpetrators of evil and killings, Kanu also said that he and IPOB followers have been vindicated by the recent abduction of the Imo State governorship candidate of the All Progressives Congress in the 2019 election, Ugwumba Uche Nwosu, by the police that politicians had been responsible for the killings and atrocities in the state.

The leader of Kanu’s legal team, Ifeanyi Ejiofor, stated these in a statement titled ‘Update on our routine visit to our indefatigable client Onyendu Mazi Nnamdi Kanu at the Headquarters of the Department of State Security, Abuja on December 30, 2021.’

He said, “Onyendu sends his best compliments and appreciation to all those of his followers who have remained undaunted and defiant in the face of all odds. He salutes all those who have remained resolute and undistracted to the cause and demonstrably obedient to the appropriate chain of command.

“The new year offers us renewed hope in Chukwuokike Abiama. It will herald divine grace and favour of unimaginable proportions. Abiding grace and miraculous happenings will punctuate it. Sorrow and sighing shall take a sudden and unremitting flight. Chukwuokike Abiama being and abiding with us, we shall reap and appropriate beneficially comprehensive victory on all sides.

“I undertook our routine visit to Onyendu. I did so exclusively. In the course of my visit, both of us engaged in fruitful discussions that substantially bothered on the legal strategy we would deploy at the next court sitting on January 18, 2022. Onyendu was particularly enthused when he realised that we have set to task and brought to perfection all legal engineering implicit in the options available to us.

“I also briefed Onyendu on a number of subsidiary but very important issues. He consistently laid emphasis on discipline and obedience to the hierarchy of command and maintained that his position on this is definite and unshifting. Further, he made the point, for the consumption of millions of his supporters, that the recent development in Imo State signifies a clear message to Umuchineke that Chukwuokike Abiama predominates in all human affairs and would continue to rule in the affairs of men.

“The recent stunning revelation in Imo State vindicates Onyendu entirely. He has long before now made the point that the chilling atrocities perpetrated in Imo State by agents of darkness are the handiwork of politicians, who are their mastermind and paymasters. Onyendu has therefore exhorted Umuchineke and his followers, in general, to remain calm, law-abiding, focused and peaceful in all their undertakings.

“He predicted that many more criminal gangs ravaging our land will sooner than later gravitate to their deserving and ignoble end. He was also emphatic on the need for Umuchineke to be circumspect in their words and actions. He admonished Umuchineke, and his other followers in general, to be eternally vigilant in all they do and to show conscious restraint and forbearance at all times.

“He warned that enemies of struggle are sundry and varied and that they constantly evolve devious strategies to inflict anarchy and mayhem on the polity. When they actualise their evil plan in any instance, they knowingly instigate false propaganda and lay blame for what they have done on the doorstep of members of IPOB. Onyendu has today cursed the persons concerned and has declared that eternal perdition will be their reward. Onyendu is also genuinely concerned about the magnitude of violence that has been unleashed by criminal gangs in the land of our fathers.

“These gangs no doubt are the foot soldiers of those workers of iniquity intent on giving the peaceful movement a bad name. Members of these gangs are sponsored and comforted by these elements. Onyendu is emphatic on the curse he has placed on them. He has supplicated unto Chukwuokike Abiama to guide and protect Umuchineke and to continually expose and punish those elements intent on besmirching them.

“Further, Onyendu has admonished his followers against being purveyors of falsehood and cheap talk. They should not knowingly assist his detractors by unwittingly propagating falsehood. He issued a stern warning against those he regarded as not keeping faith with the structure he has put in place.

“He observed that deliberate propagation of falsehood is aimed at misleading the unwary and uninformed and, most times, is targeted at foisting mischief and disaffection in the system. It is a set objective of all those detractors whose pastime is to pull the peaceful movement down.

“But such detractors have always failed to achieve that objective and would never succeed no matter how hard they try. He also observed that correct information dissemination is an important tool.

“He advised that any information about him should proceed from the appropriate channel and must be verified to confirm its authenticity. Persons seeking such information must desist from resorting to fake platforms created by his enemies to source for such information.”