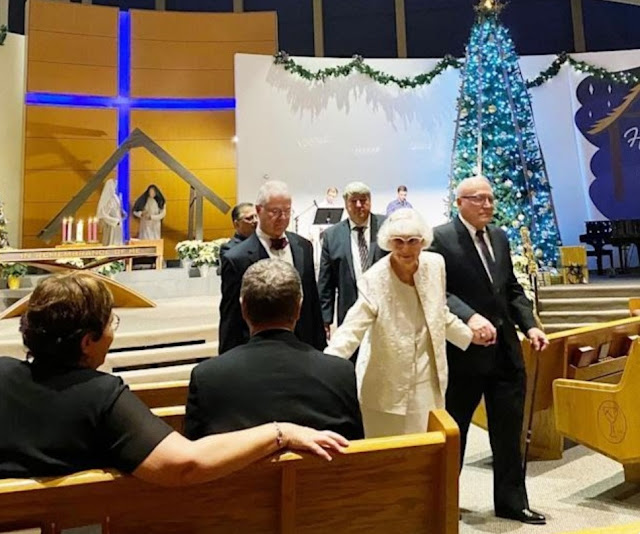 Eileen and Vince Triggs, who died at 96, were married for 71 years. They have four kids, four grandchildren, and seven great-grandchildren.

However,  before Vince died, he told his wife that he wanted her to move on and be with someone who would love her as much as he did and he suggested his best friend Ron Fulton is the one person he knows who would.

Mike Triggs wrote a Facebook post on his dad’s final day, saying his dad “expressed his desire that mom not spend too much time grieving and it was his desire that at some point she might remarry and be able to share the rest of her life with someone who would care and love her as he did.”

Mike wrote that his mum called it “crazy talk.”

Mike also wrote that his father said: “While there would sure to be many, the only man that he knew that would treat her as he would want her to be treated was his best friend, Ron Fulton.”

After Vince’s death, Eileen and Ron spent time together. He helped her clean out Vince’s closet. They shared meals and watched football games. They went to concerts.

They wed on December 26.

The couple’s former spouses and friends were very much on everyone’s minds the day of the wedding, Mike Triggs told TODAY.

“Both are convinced that their spouses would approve and give their blessing because neither would want the other to be alone and would want them to be happy,” he said.

Mike Triggs said in many ways, it’s like a “Cinderella story.”

While his mum and Ron were cleaning out Vince’s closet, they came across a pair of custom-made boots.

Ron was going to try them on but Eileen told him they would never fit. His dad’s boots, Mike said, were a perfect fit. The same thing happened with a ring Eileen had planned to sell. It belonged to her deceased husband, but Ron tried it on and it fit just right.

Triggs said Ron will never take his dad’s place. But, he wrote in his Facebook post, “Obviously, this came as a shock to all of us. The timing seemed to be a bit soon but after thinking about it Mom is 90 and Ron is 87.

“Neither is getting any younger and it just makes sense that they are able to be happy, go places and do things as a couple while they are both in good health.

“And after all that is what Dad wanted. He didn’t have a stipulation that she wait two and half years, he just wanted his wife of 71 years to be loved and be happy.”