A married woman has caused a stir online after she was spotted licking a birthday cake reminiscent of a woman giving BJ to a man in the bedroom. 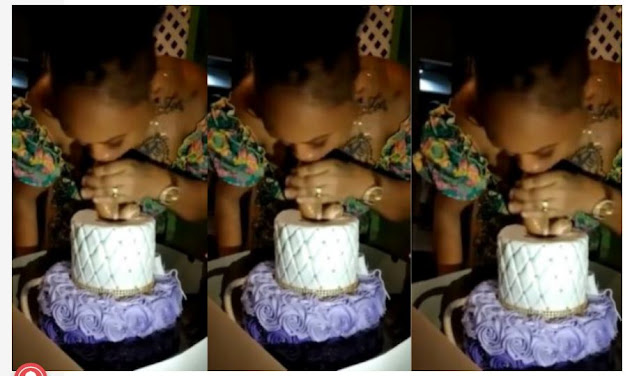 The married woman aggressively sucked the cake and she exhibits her debauchee while guests who attended her birthday party cheered her on.

Marlon G: She what somebody’s daughter Is doing. Then on Sunday someone will go and give testimony that yesterday was my birthday… Disgusting and embarrassing!

Eke D: What nonsense is this for Christ sake? Why cant people respect and fear God again? Must you do everything you see? Habaaa!!!

Opurum J: For you all to have understood and define what this woman was doing….that shows you are extremely corrupt in mind, body, and spirit. What if she comes out and says; as it was her birthday,,, she recalled and had to perform how she used to rush her mother’s breast so passionately during infant…. who would defend that? Moreover it was una fellow righteous human being that made the cake and has being delivering to similar events too.

Dre P: To you it looks funny, but do not forget that internet can never forget anything. Your children will see this junk you call joke. Good luck.

Eze C: You are putting on fake wedding ring. Anyways, seeing all your body, one will know you are SATANIC. Shame to any man that will be close to you.

Click HERE to watch the video if it doesn’t show below;