A cheating husband was left with no route of escape than to help his sidechic jump down from the storey building they were having a supposed affair on when his wife came knocking. 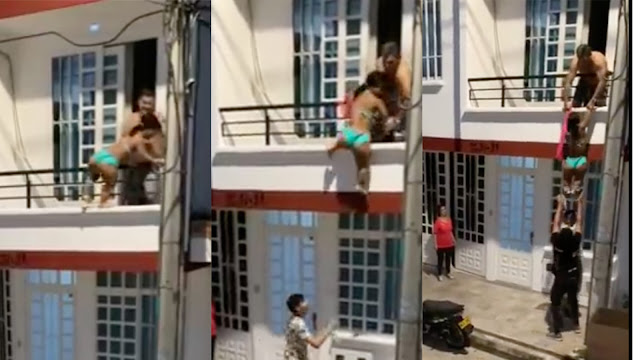 Apparently, his wife suspected that her husband was in there with a woman considering the fact that she had to banged the door severally before it opened.

Sensing potential chaos, the man quickly came out to the corridor to watch his wife downstairs banging the door to be opened. He quickly went inside and helped this diminutive side chic jumped down from the storey.

Onlookers helped her to get down safely after the wife had forcefully opened the door and gone inside to assess the situation. The diminutive side chic quickly hid herself under a cardboard in order to hide from the angry woman.

She was eventually caught and the chase that took place is best seen in the video below: