61-year-old American grandmother, Cheryl McGregor, who recently tied the knot with her 24-year-old man, Quran McCain, has revealed they are planning on having a baby through surrogacy. 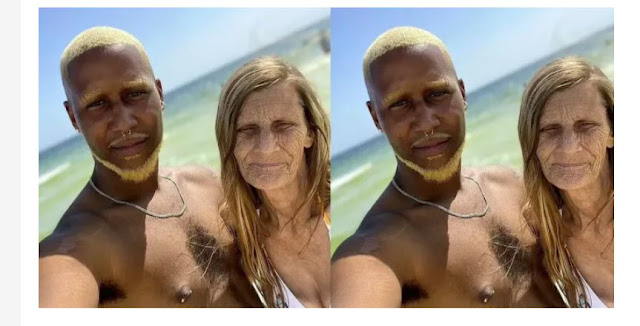 According to her, they decided to opt for a surrogate pregnancy after attempts to conceive naturally were unsuccessful.

“We prefer surrogacy, however, we have seen a lot of people embroiled in legal complications far after the child is born, We are looking for a nice surrogate who is willing to sign a contract to have nothing to do with the child after it’s born. We don’t want people trying to have a baby for us for financial gain, we are not that financially inclined ourselves. With adoption, we are looking for a biracial baby so the baby would know, ‘I have half black and half white parents”, the husband, Quran McCain said.

Cheryl has seven children and 17 grandchildren already, but she and her 24-year-old husband said they feel they deserve to have children of their own.

Cheryl’s daughters were initially considered to carry the couple’s baby, but both have had hysterectomies so were unsuitable.

Due to her age, Cheryl noted that she might not be there for their children for long, but she has faith in her husband to raise them well.

“We understand that I may not be there for as long as Quran is but I have faith in him. If I am not here he can do it. He’s gonna be a great father, he’s a responsible adult. I had every bit of faith that he could raise our child and do it very well.”

The couple first went viral after they shared video clips of themselves on TikTok. The 61-year-old grandma from Rome, Georgia, first met Quran McCain in 2012, while they were both working at the American fast-food chain Dairy Queen.